And the Player Selection is in...

My previous attempts at collecting have all been mismanaged and disorganized.  I would usually buy anything on ebay which caught my eye, whether I particularly liked the player or not.  Of course this was way back in 2003/2004 when memorabilia cards weren't absolutely everywhere and they still meant something special.  However, this time I've decided that, since I don't really have a home team (other than the Thunder), I will adopt a player new to the league some time in the last 8 years.  The player I decided on was Lastings Milledge.  Since I haven't even really watched a baseball game in ages it was really just a shot in the dark.  My goal, initially, will be to collect all of his rookie cards (of which Beckett says there are only 10).  However, I'm going to do my most earnest to actually acquire all the parallels to his rookies as well.  That puts the total to somewhere around 50, not including the 1/1s.  Many of these are hefty buys - the Topps base refractor goes for upwards of $50 in most places - but I will try to pace myself in building the collection.  The total number of cards containing Lastings as of today is 655, so I've got a hill to climb but its not nearly as steep as most.  Whether or not his cards become even more valuable, or he flops as a professional doesn't really matter for me.  I'm in it for the collecting, and of course the spreadsheet upkeep.

The complete rookie set can be viewed in my Beckett collection.

To start things off, we'll just go ahead with the most common card of Lastings out there.  I very much like this card.  There are a myriad of colors to choose from, the grass and dirt are well definied, and the cards showing his typical robot arm.  Of course, it doesn't hurt that its from the set that IMO is the best base design of the last fifteen years. 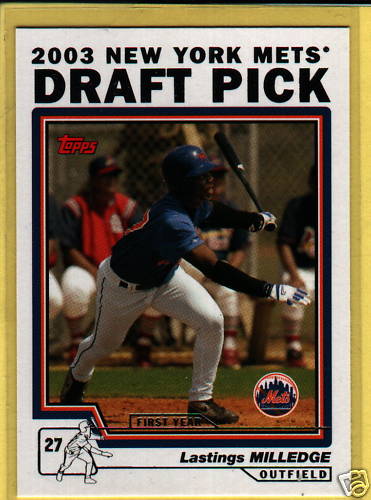