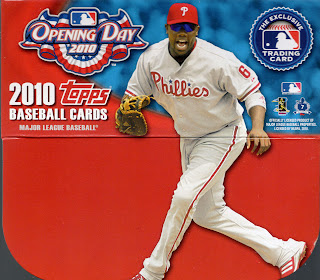 Opening Day for the baseball season isn't even on the horizon, but Topps has gone ahead with their release commemorating the event anyway.  At $0.99 per pack, this is the best value for any novice collector.  I acquired a 36 pack, 7 cards per, from Amazon for $29.99.  I believe the 36 count box is the only one which has been produced, so no Hobby vs. Retail here.  The set consists mostly of cards which you'll find reside in the 2010 Topps base set, though in Opening Day often have a different number.

Base set
Mimicing the main set, but numbering 220 instead of 330, the Opening Day set contains previews of some Series Two cards.  The only difference between the two sets is the inclusion of the Opening Day logo on the front. Cards which appear in both sets will have the same image, but may have different numbers on the checklist.

Parallels (1:5)
Where I think Topps usually excels is in its parallels.  And here for the most basic of sets I think it does right by the customer.  Unlike the 2010 Topps set which contains up to 4 parallels (6 if you include the Target/Walmart ones), Opening Day only has a single parallel, the blue parallel. Topps has stuck with the new heat printed serial numbering instead of the traditional foil stamp. (The heat printing is occasionally smudged, but I've not seen one illegible).

Mascots (1:4)
By far my favorite insert.  Who doesn't love seeing a whole subset of mascots?  The backs include the dates of their birth and biography.

Where'd You Go Bazooka Joe? (1:9)
The only really terrible insert of the whole set.  Sure this set is intended for the young generation, but I don't imagine that any kid over 10 would show any interest in this sort of thing.

Superstar Celebrations (1:9)
A decent insert with an All-Star Game feel to them.  This set describes big events taking place over the last few seasons.  I prefer my "look back at" cards to keep within the last two or three years, as these do.

Topps Attax Opening Day Foil (1:6)
This cards are intended to be used in the trading card game of the same name.  These players, if I remember correctly, are exclusive to the Opening Day set and have better stats in some way.  They are neat cards all by themselves, as they have a cool sheen to them, however they do take damage fairly easy.

Toppstown.com Stars (1:3)
Just like the 2010 Topps set, the occasional pack will contain a code for the Toppstown virtual card game.  The code is contained within the white box I've blanked out seen here on the front.  These cards do differ from the base set cards in design and there is no parallel set (a la Finest Class) for this insert.  Take special not that many of the cards have both lowercase and uppercase letters, and if I recall correctly the base ones did not, so be careful when you're putting in the codes online I guess.

This set is perfect, in my mind, for any level collector, but especially for the young or novice collector.  An easily completed base set, simple insert and parallel system, and unbeatable price make this a product many should enjoy.  I came up just 12 base cards short of the full set, with no duplicates (Topps' collation is doing great lately), and about 1/3 - 1/2 on all the insert sets.
at 10:47 PM